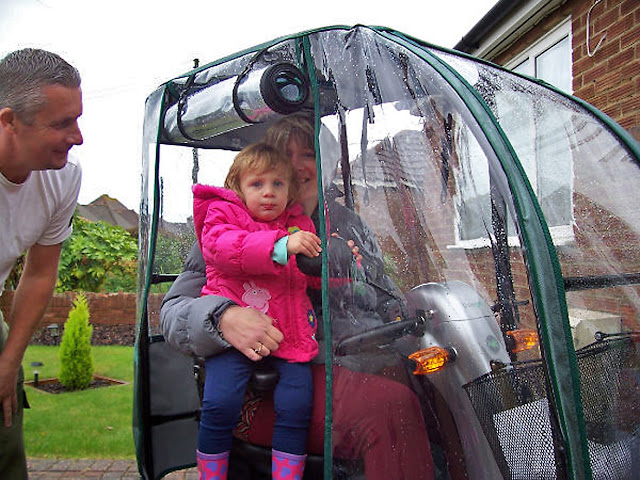 Sarah Pile was coping well with her MS – until she had her daughter Emily two years ago. Since the pregnancy, Sarah’s condition worsened and her independence diminished. She became wheelchair-bound and increasingly reliant on the help of carers.

But last Monday, Forever Active delivered a new 5 wheel Quingo Plus with a rain canopy to Sarah, on permanent long-term loan. The gift was the result of a campaign by her Multiple Sclerosis Centre – the Kent MS Therapy Centre – which asked Forever Active on her behalf.

“It’s been a complete godsend – I can’t thank Quingo enough,” says Sarah. “Scooters are expensive and we couldn’t afford one, but with my daughter just two years old, I was missing out on the important things and couldn’t even take her to nursery. All I had was a small lightweight scooter which couldn’t deal with the countryside roads in my village, or go out in the rain.”

Sarah says the new Quingo has changed everything: “I’ve only just turned 40, and before having Emily I could get around with sticks and even drive. Losing my independence was one of the hardest things to deal with. I need help in so many areas of my life now – but when I’m in the Quingo, I feel independent again. It’s so nice to be able to take her to school and to get out and talk to people again.

“My daughter loves it too – now I can take her to nursery, and she thinks it’s the same as her toy car. When she plays in the garden in her car now, she says: “Mummy, look, I’m in your car!”

Sarah found the Quingo perfect for her – as she’s quite tall, she was surprised at the leg room – and very pleasantly surprised by the design: “I couldn’t believe how stylish it was. And the seat is so comfortable and can be adjusted. I’m quite a tall person too and there’s so much room for me to put my legs out on the footplate. I didn’t feel hunched up at all. It’s so comfortable, which is important when you’re going to be in something for a long time.”

“Really, it’s given me my independence back. I can’t thank Quingo enough.”

About the Author: AVC - Quingo

Page load link
We use cookies on our website to give you the best experience we can offer you. By clicking “Accept All”, you consent to the use of ALL the cookies. However, you may visit "Cookie Settings" to provide a controlled consent.
Cookie SettingsAccept All
Manage consent

This website uses cookies to improve your experience while you navigate through the website. Out of these, the cookies that are categorized as necessary are stored on your browser as they are essential for the working of basic functionalities of the website. We also use third-party cookies that help us analyze and understand how you use this website. These cookies will be stored in your browser only with your consent. You also have the option to opt-out of these cookies. But opting out of some of these cookies may affect your browsing experience.
Necessary Always Enabled
Necessary cookies are absolutely essential for the website to function properly. These cookies ensure basic functionalities and security features of the website, anonymously.
Functional
Functional cookies help to perform certain functionalities like sharing the content of the website on social media platforms, collect feedbacks, and other third-party features.
Performance
Performance cookies are used to understand and analyze the key performance indexes of the website which helps in delivering a better user experience for the visitors.
Analytics
Analytical cookies are used to understand how visitors interact with the website. These cookies help provide information on metrics the number of visitors, bounce rate, traffic source, etc.
Advertisement
Advertisement cookies are used to provide visitors with relevant ads and marketing campaigns. These cookies track visitors across websites and collect information to provide customized ads.
Others
Other uncategorized cookies are those that are being analyzed and have not been classified into a category as yet.
SAVE & ACCEPT
Powered by